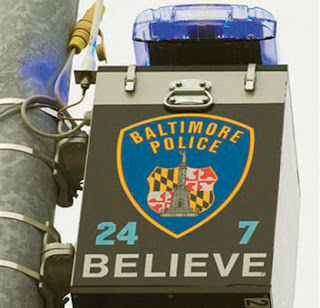 Internal Affairs Official Charges Department With Scapegoating
By A.F. James MacArthur Ph.A.L.
Although she was hired to probe internal corruption and wrong doing within the Baltimore Police Department; JoAnn C. Woodson-Branche stated at a press conference today, that her efforts to hold police officers accountable were routinely thwarted by her superiors.
When recommendations for punishment of rogue officers were made, Woodson-Branche stated she routinely saw them ignored, with many officers never having to face consequences for their actions. She also spoke of being micro-managed and often stonewalled by Deputy Commissioner Deborah Owens, a former Wendy's fast food restaurant manager with numerous EEOC complaints against her as second in command of the department.
Woodson-Branche was fired in April. After her dismissal, 50 cases against officers were summarily thrown out. The department claims the cases were flawed and rife with error, but Woodson-Branche is crying foul. She believes the department is using her as a scapegoat and a diversion so that the real issues facing the department could continue to be ignored.
In what is appearing to be just the opening rounds of what promises to be a long and contested battle, numerous accusations of criminal malfeasance and coverups were briefly mentioned or alluded to. The Baltimore Police Department has said it will not respond to specific accusations made by Woodson-Branche, nor will it discuss any specific details of her being relieved from duty.
RELATED:
An article by Justin Fenton of Baltimore's daily diminishing news journal states:
But one allegation sure to make waves is that the department quietly agreed to drop a case in which one of the accused was the president of a group for black officers. In return, Woodson-Bracnhe said, the officer agreed that the group would not speak out about a separate case in which another officer alleged that his white supervisors had forced him to view a Ku Klux Klan Web site.
Sgt. Kelvin Sewell, who is black, said that he was forced to view racist material on the Internet, and critics of the department alleged that the case against two white officers wasn't being taken seriously. Woodson-Branche said the Vanguard Justice Society, a group for black officers, was prepared to speak out about the case.
But its president, Sgt. Darryl Massey, was facing internal charges himself alleging that he and seven others were abusing overtime, in some cases doubling their salaries. Woodson-Branche said that Massey agreed not to speak out about the Sewell case if his case was dropped. When the department cleared dozens of cases this month, Massey's was among them.
Email ThisBlogThis!Share to TwitterShare to FacebookShare to Pinterest
Posted by MacArthur Media Staff

:) "daily diminishing news journal?" come now! the baltimore eclipse? diminishing? what on earth would we do without it?

They whose name shall not be stated!

Do you have copy writer for so good articles? If so please give me contacts, because this really rocks! :)