Would The Real Terrorists Please Stand Up? 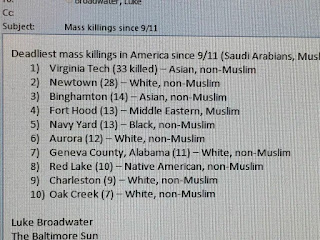 Of the 10 deadliest mass killings in U.S. post-9/11, 90% were by non-Muslims; 50% were committed by white men. Further, at this point not a single individual identified with responsibility for the Paris Attacks is a Syrian.

With all the irrational fear and paranoia gripping the country right now, some folk seem intent to let emotions get in the way of facts. As a country we're supposed to be better than that.

The current zeal being pushed to establish policy driven by emotional reaction, is not only bigoted and ignorant, it's downright scary.

In reality it's reflective of cowardice. Clearly we're no longer the home of the brave.