Baltimore Police chief spokesman, Anthony Guglielmi, confirmed to the Baltimore Spectator, two officers were suspended and placed on administrative duty while the incident is investigated.  Although he would not release the names of the officers involved, sources reveal them as Kelly Steinhorn and Jill Murphy, both assigned to the Mounted Unit, which patrols the streets on horseback.


SWEPT UNDER THE RUG?

Guglielmi also stated, that while the incident occurred in October, it is still currently under active investigation, with the administrative suspensions being handed down only within the past week.  He could not explain why a two month old incident, was still under investigation.

Sources tell the Baltimore Spectator, a third female officer caught the others in the act and may have been threatened about going forward with reporting it.  Word is, the unidentified officer's complaint may have been initially ignored by Mounted Unit supervisor Sgt. John Ambrose.

The incident is reported to have happened at a bar in Baltimore.  While Guglielmi claims the accused officers were both off duty, it is not clear whether the third officer reporting the incident, was also off duty.  The circumstances involving how or why she came into contact with the initial two officers, and the third, as of yet to be identified, individual involved in the alleged sex act remain murky, but sources say she may have been on duty.

Although the supposedly took place while the officers were "off duty," the spokesman referred to it as an "integrity issue," and said possible violations of officers code of conduct would not be tolerated. With the entire incident under investigation by the Internal Affairs Division, the officers face further potential punishment, including possible termination. 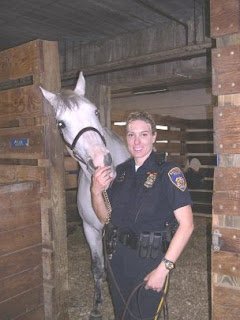 For a department that's no stranger to constant scandal and controversy, this latest episode is serving as the number one scuttlebutt with officers on the force.  Another distraction from their core purpose.  According to one officer, speaking anonymously, "we can't get out of our own way sometimes."